Editor’s note: we’re publishing a column by Carla Pedret, senior digital manager for audio products at Radio Free Europe/Radio Liberty, discussing RFE/RL’s successful experience creating a narrative podcast “Lukashenka’s Lackeys”. Published first in the Belarusian language, it looks at the crackdown of Belarusian 2020 protests from the perspective of security forces – and has reached a wide audience despite the censorship imposed by Lukashenka’s regime.

Belarusians have news fatigue. Since Alexander Lukashenka’s fraudulent re-election over two years ago, hope for political change and COVID-19 anxiety have turned into frustration and despair. The government has imposed harsh criminal penalties for consuming independent information. As a result, Belarusians are switching off the news.

At Radio Svaboda, the storied radio station turned digital media established in 1954, the fatigue we all experienced led us to rethink our work and explore new formats. Narrative podcasting was one of the things we experimented on to reach a target audience of listeners in Belarus, the country that may be disenchanted with its leadership. The format has been growing in popularity globally, and we sensed that by adopting it early, we’d be able to become a leading voice and benefit from its newfound popularity.

At first, we worked on “At War with Covid-19,” a narrative series based on the diaries by Dr. Uladzimir Martau, the head of the anesthesiology and resuscitation department of the Vitebsk Ambulance Hospital in northeastern Belarus. Dr. Martau was the first senior medical official in Belarus to openly speak about the catastrophic situation caused by the coronavirus, while government officials – on President Alyaksandr Lukashenka’s orders – insisted that there was no pandemic and no need for a public health response.

The podcast had two seven-episode seasons published between January and July 2022. It was available on-demand on SoundCloud and YouTube and listened to 47,000 times overall. We were excited about its resonance despite censorship and the general fatigue on COVID-related reporting. It clearly resonated with people who must have felt that their experiences in the country were part of wider problems that otherwise would not have been documented.

While we were publishing Dr. Martau’s diaries, we started working on another project, this time on a more political subject: Everyone in Belarus or from Belarus, including us, thought they already knew everything about the 2020 protests after Lukashenka’s rigged re-election. We wanted to challenge that with a narrative exploration of what had happened behind the scenes.

Leaked audio conversations among security and political officials struggling to respond to the popular protests had circulated. While incredibly interesting, these recordings on their own had not yet been packaged in an accessible format for the wider public. They lacked context and explanation: who was speaking to whom and why is that significant?

A team of four journalists led by Dzmitry Hurnevich edited the leaks into a narrative flow and added context by interviewing former security officers, regime insiders, opposition activists, protesters, and Nobel Laureate Svetlana Alexievich. “The main difficulty during the preparation of the podcast was the verification of all the voices. We had to be 100% sure that the voices belong to the people we claim them to be,” Hurnevich said.

In gritty, behind-the-scenes detail, the podcast series shows how the security forces were initially caught flat-footed and underestimated the nature of the mass opposition, but then brought brute force to bear against an opponent that lacked the experience and tools to prevail over a ruthless regime.

The team called the six-episode podcast “Красаўцы” (something close to “Good Boys” in English, or “Handsome Men” when translated literally), a colloquial term Lukashenka bestowed on his goons praising them for protecting him from protesters. The project, “Lukashenka’s Lackeys” in English, published the final episode in September 2022.

The six episodes received more than half a million plays on YouTube, and thousands more from other online platforms. Overall, the podcast was played about 600,000 times, averaging 300,000 plays monthly. “Our audience feedback was overwhelming and inspiring. Hundreds praised our work on social media, claiming we produced a ‘historical job,’” Kanstantsin Lashkevich, Belarus Service managing editor, said.

Belarus has no free press and criminal penalties for consuming independent media. Yet, most of the 600,000 total plays originated inside the country. Exact numbers may vary given widespread use of VPNs (Virtual Private Networks) to counter state censorship and surveillance. The episodes were also available as downloads so that listeners could share the audio files among their social circles. While these downloads were not tracked, anecdotal evidence suggests files were in fact shared widely.

We originally expected to reach a large audience through podcast aggregators. Instead, we found there is a bigger market for narrative podcasting in Belarusian on YouTube – a platform where we benefited from already having a substantial following. While we assumed most people would listen to the audio-only on YouTube, we hired a graphic designer to visualize the storytelling to make it more attractive for anyone reading the subtitles or watching the feed.

We generated listens organically on YouTube, but also shared the podcast through produced excerpts and teasers on our website and social media accounts. The team created a content plan with over 150 items to distribute and support the podcast on nine major social platforms.

Here you can see a fragment of our social media content plan.: 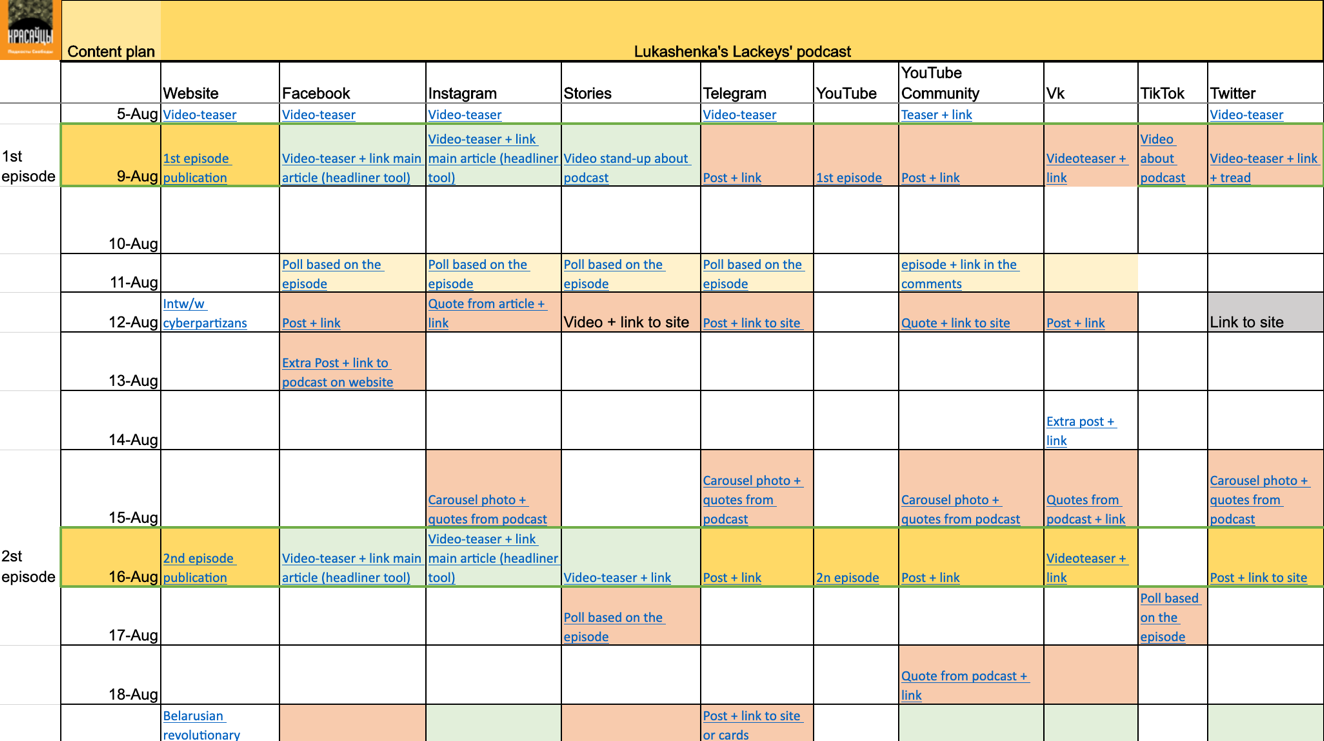 Only after publishing in Belarusian, we published the series also in Russian language. This decision seems counter-intuitive since most of the leaked material was in Russian, but it was a deliberate editorial statement to tell this Belarusian story first in its native language. It was relatively easy to translate the series into Russian since the recordings and some other materials were already in Russian language.

In both languages, we hope that the narrative podcast will become an evergreen series, listened to in secret inside the country, and openly in the diaspora. We will try to build on these two series to see if we can create more such reporting that will become a long-term reference about key events.

“Anyone can be imprisoned for six years for just liking a ‘wrong’ social media post,” said Kanstantsin Lashkevich, managing editor of Radio Svaboda. Projects like this are “the only way to fulfill our mission to provide Belarusians with fact-based and balanced information about what’s happening around them.”

Did you like what you just read? Spread it to the world!