Insights on product thinking from across the world of media

Recently, I had the privilege to moderate a journalism panel with intriguing guests from three different continents. It was a panel during the hybrid IPI World Congress in Vienna.

First, let me tell you how awesome it was to attend a real life event in almost two years. Please, let there be more. The ‘conference Zoom fatigue’ was actually a constant topic to talk about with other participants.

It’s true that you can attend more events online than in-person but no “digital coffee break” will ever replace the real thing where you talk to people and where most of the magic of in-person events happens.

Of course, journalism was at the centre of the conference, you can watch some of the discussions already uploaded on YouTube. And you can watch below the one I am talking about here.

Nigel Mugamu and Simon Allison come from Zimbabwe and South Africa. Nigel is the founder and chief storyteller at 263Chat and has pioneered the ePaper in PDF form distribution via WhatsApp. Simon is the editor-in-chief of The Continent, a 21st century African newspaper, as he calls it.

During their presentations, both have described how they had to rethink the way they approached distribution in order to reach as many people as possible, but at the same time reaching audiences with limited access to the internet or some with governmental restrictions.

263chat is present on all major social media, they have a classic news website. Their core news business comes in the form of an ePaper published daily via dozens of WhatsApp groups delivered to 50-thousand subscribers.

Every day, the newsroom puts together stories from all over Zimbabwe, then they need to be edited way down (though the full version goes on the website) in order to fit on the ePaper and a PDF is created with classical ads as you can see in a print newspaper.

[Do you like this article? Subscribe to The Fix Weekly Newsletter and receive our
best stories, as well as exclusive opinions, job offers and opportunities, directly in your inbox]

The idea behind The Continent (latest edition here) is very similar. It showcases the best reporting from journalists across Africa. It’s published as a PDF ePaper distributed to a core audience of 15-thousand subscribers with a note to share it around with friends and “people who you know will appreciate reliable news from a continental perspective”.

Simon said they keep the subscribers count lower on purpose. Because of WhatsApp restrictions where you can have a maximum of 256 participants in a chat, the bigger your audience grows, the more time it will take you to distribute your content. Building a bot to distribute for you is not an option as WhatsApp can detect those.

With WhatsApp of course, there is no analytics, you don’t get view count. Based on audience surveys and estimates, Simon shared The Continent is reaching 105-thousand people across 102 countries. The Continent also uses Signal.

A few years ago, many European publishers started also creating WhatsApp groups and sharing news summaries and chatting with their audiences. Most of these experiments I have followed have ended. Some said it was too labor intensive, others lacked the data to justify running the experiment.

When I first heard about the ePaper in PDF form distributed via WhatsApp a few years ago, it took me quite a while to figure out why it would not work in Europe. We are simply used to other forms of news digestion, newsrooms see homepages as their primal distribution system and we are used to getting more data on the audience in order to better monetize.

These African examples, though, hold a different lesson. Both Nigel and Simon said there are fairly strict internal rules when it comes to writing stories for the ePaper, almost the same as for the print newspaper. Simon said The Continent has to cap the maximum word limit per story at 300. Also, there is a certain limit to the pages they can include in an issue.

Doing the hard work of getting the story down to that limit helps readers. Also, operating within smaller communities and a very targeted resharing of ePapers are worth taking note of.

One story Simon shared during his presentation especially stuck with me. The Continent was able to deliver a story debunking the Tanzanian president’s claims that there were zero Covid cases in the country. As the ePaper is distributed as a PDF there is no limit on distribution. Instantly, it reminded me of stories of how activists use USB flash drives to spread stories to North Korea by throwing them around.

More from The Fix: Building a modern and sustainable news outlet is easier than ever

How is Schibsted in Scandinavia breaking through in the attention economy 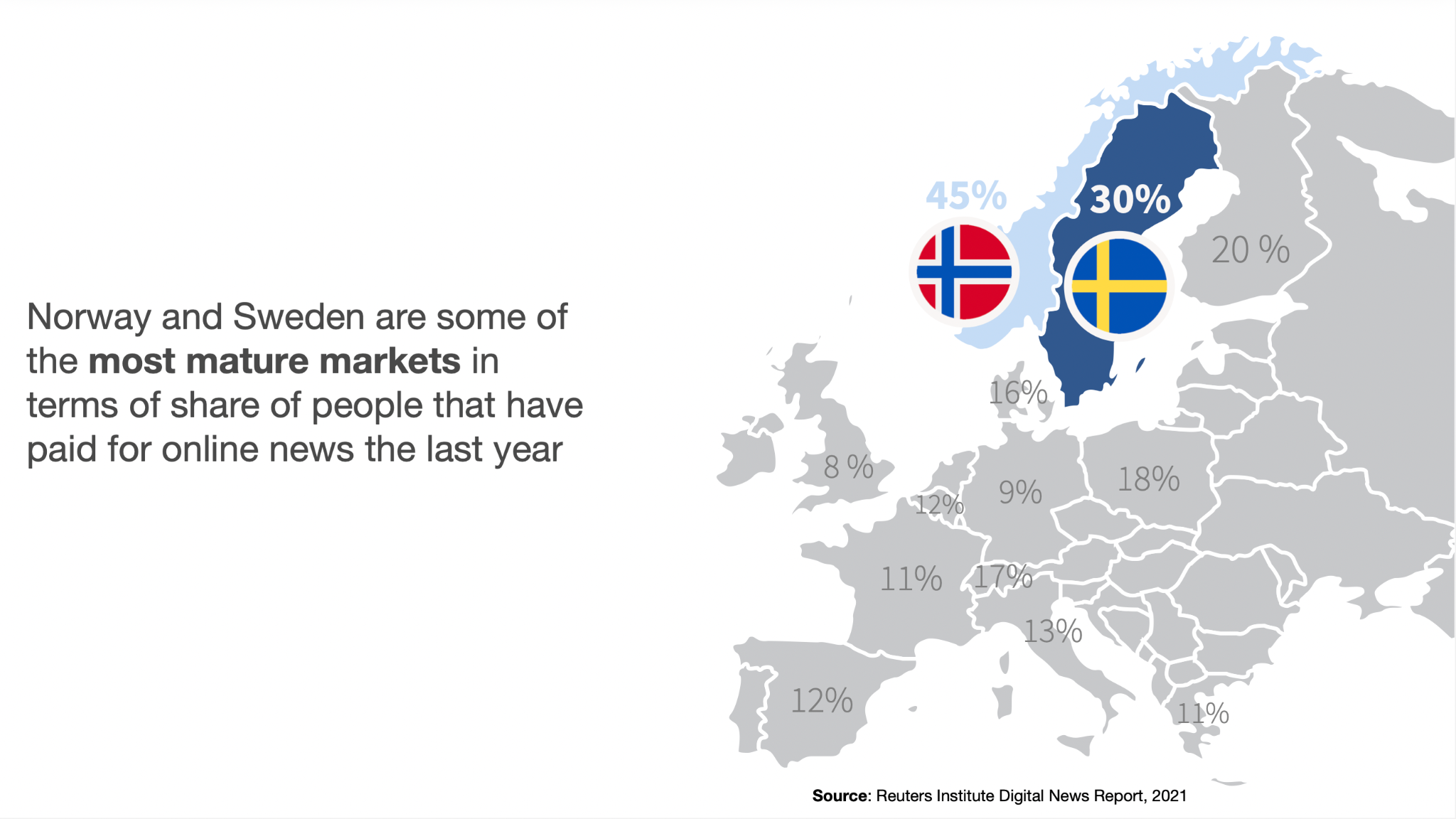 Schibsted News Media is one of the biggest Nordic publishers and recently announced it has shared it crossed one million digital subscribers.

Digital subscribers are distributed between Schibsted’s journalistic brands in Norway and Sweden. If you include paper products and other subscription-based services, the total number of subscribers is close to 1.5 million.

Karl Oskar Teien is the director of product at Schibsted and Aftenposten, Norway’s largest subscription newspaper with 130+ digital subscribers. It went from 80% advertising revenue in 2007, to 80% subscription revenue in 2020.

In order to compete with attention grabbing social media, streaming platforms and all other things people spend online, Aftenposten did a series of adjustments and experiments.

They found out half of all front page visits never lead to a single article view, so they decided to bring more information to them and started showing brief summaries via bullet points to each story (only for subscribers).

You would have thought that would bring down the click-through count but users exposed to the smart summaries did not end up reading fewer articles in total and it became a popular feature especially among daily visitors.

Another experiment was top stories of the day on the top of the page and written summaries you would find in the opening of newsletters (similar to what the Buzzfeed News app did around 2015, I always wondered why no one ever tried that). Turned out this was a popular feature among casual readers.

Next, Aftenposten sees audio as an upcoming form of news consumption but acknowledges that podcast production costs are high. They are working on a synthetic voice for a text-to-speech feature. For listening you don’t need to look at a screen, you can save the audio for offline listening and it turns out audiences are willing to pay for an audio version of stories.

The life of a youtuber journalist

Last but not least, Nevşin Mengü from Turkey, a reporter, youtuber and a TV anchor for Deutsche Welle Turkish, also shared some lessons learned while building an independent media.

Every day she does a 30 to 60 minutes long news show for her subscribers on YouTube bringing independent reporting and real journalism to an audience that mostly lacks both.

Thanks to built-in monetization options with ads and a membership model on her YouTube channel Nevşin is able to sustain her operation and even have two staff members.

The video platform is a blessing and a curse at the same time. She is able to reach millions and get paid for providing quality content, but that also means she has to stick to a schedule, not miss a day (even before our panel she live-streamed a whole show from her hotel room). Plus, one of her staff members in charge of technical operations always has to keep an eye on the YouTube algorithm.

The life of a youtuber journalist is not easy, though Nevşin said it gives her independence and there are hundreds of thousands of viewers who count on her reporting to hear what really happened that day in Turkey.

More from The Fix: The Business of Telling Stories

Photo by Anthony Tuil on Unsplash

Hi! I'm David Tvrdon, a tech & media journalist and podcaster with a marketing background (and degree). Every week I send out the FWIW by David Tvrdon newsletter on tech, media, audio and journalism.

Did you like what you just read? Spread it to the world!